Lady Isabel and the Elf Knight ballad (or May Colvin ballad)

The song appears in many variants but the main theme is that the knight of the title woos the lady with music, or abducts her, and carries her off to a deep wood or seaside, where he tells her that he has killed seven (or more) other women and plans to do the same to her. In many European versions it is made explicit that he proposes to "dishonour" her as well. She, however, distracts him by one of a number of means and then contrives to kill him in her stead.
Some variants include a curious final section in which the lady returns home and engages in conversation with a parrot in a cage. She usually makes a bargain with the bird that she will give it a golden cage if it refrains from telling her father of the escapade with the knight.
link: "Lady Isabel and the Elf Knight" on Wikipedia

8. "O turn you about, O false Sir John,
And look to the leaf of the tree,
For it never became a gentleman
A naked woman to see."

9. He turned himself straight round about,
To look to the leaf of the tree,
So swift as May Colven was
To throw him in the sea.
10. "O help, O help, my May Colven,
O help, or else I'll drown;
I'll take you home to your father's bower,
And set you down safe and sound."

11. "No help, no help, O false Sir John,
No help, nor pity thee;
Tho' seven kings' daughters you have drownd,
But the eighth shall not be me."

12. So she went on her father's steed,
As swift as she could flee,
And she came home to her father's bower
Before it was break of day.
13. Up then and spoke the pretty parrot:
"May Colven, where have you been?
What has become of false Sir John,
That woo'd you so late the streen?

15. "O hold your tongue, my pretty parrot,
Lay not the blame upon me;
Your cup shall be of the flowered gold,
Your cage of the root of the tree."

16. Up then spake the king himself,
In the bed-chamber where he lay:
"What ails the pretty parrot,
That prattles so long or day?"

17. "There came a cat to my cage door,
It almost a worried me,
And I was calling on May Colven
To take the cat from me." 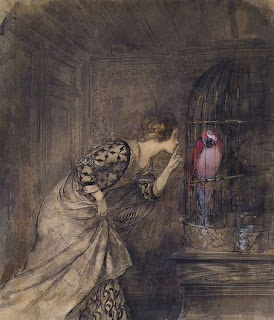