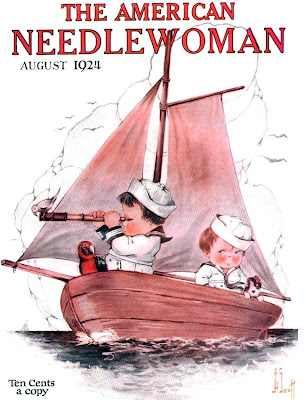 American woman changed its name to AMERICAN NEEDLEWOMAN in 1923, and continued under the new name for at least three more years. 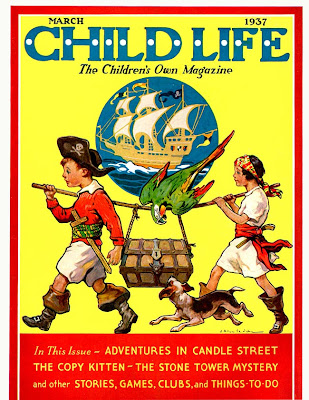 
A children's magazine with a striking sense of art and design, CHILD LIFE began publishing in 1921, and seems to have survived until 2007. 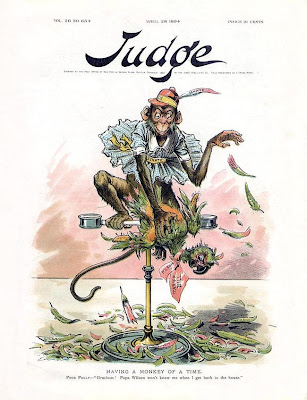 JUDGE was the second of the great humor magazines of the late 19th and early 20th centuries, having been founded in 1881 by a group of cartoonists who seceded from PUCK (founded 1877). It struggled on in various forms until 1949 (and was revived for a short time in 1953). It took the positions of the Republican party (as opposed to Democrat PUCK) and its typical cover illustration in the early days was a political cartoon. By the 1920's it was running general-interest humorous images of the day. Collections of reprint material were issued quarterly and monthly, and the JUDGE'S LIBRARY title eventually morphed into FILM FUN. 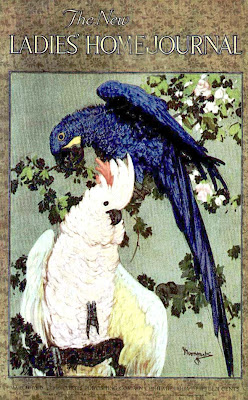 THE LADIES' HOME JOURNAL covered all aspects of what was thought of as womans' life of the time, especially current fashions, housekeeping, children, decoration, and the management of home economics. For relaxation there were lots of fiction, puzzles and games, many serious and informative articles, and some excellent cover artwork. And ads, lots of advertisements, for travel, cosmetics, clothing and fashions, jewelry, foods, domestic and kitchen appliances. 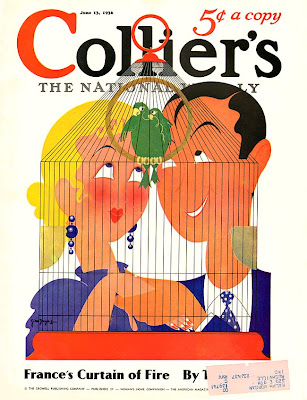 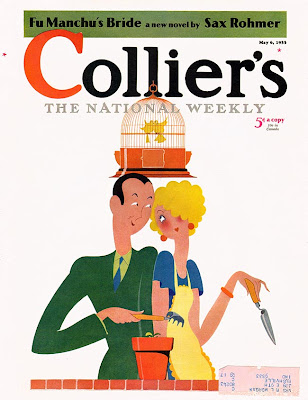 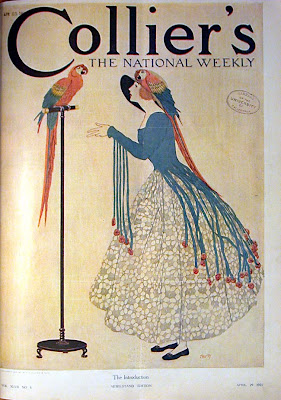 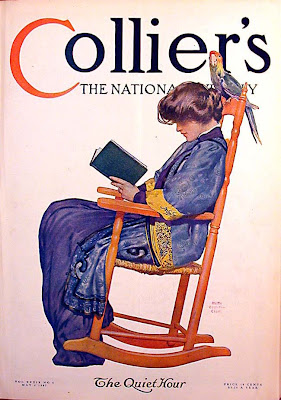 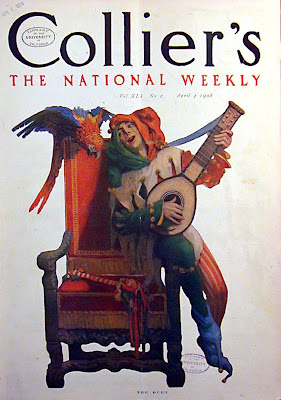 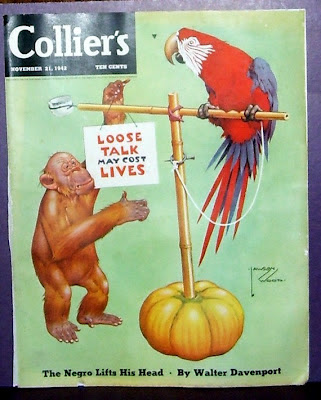 Collier's 1942-11-21
COLLIER'S, THE NATIONAL WEEKLY (originally ONCE A WEEK, and also known as COLLIER'S WEEKLY) carried a popular mixture of news, photographs and engravings of current events and celebrities, fiction, articles, science and technology, and advertisements. In the first half of the twentieth century it was a major force in American popular culture. 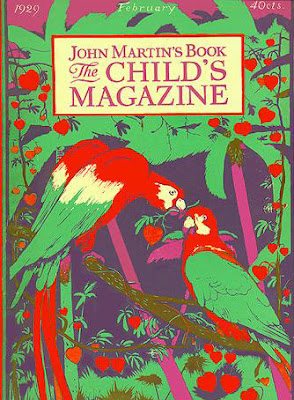 A well-known children's magazine from the first half of the twentieth century, with some striking and wonderful covers and interior art. They emphasized heavily contrasting colors and silhouetting. 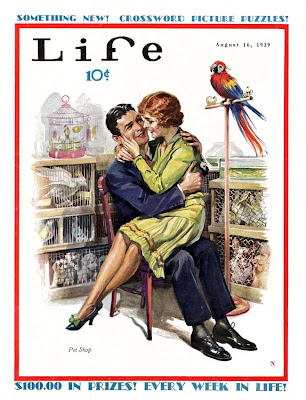 Everybody knows about LIFE, the magazine of photojournalism that first appeared in 1936 and still is with us today in various printed forms. But LIFE was also the name of the foremost American humor magazine of the period 1890-1930, and LIFE (the humor magazine) was an important and influential magazine in its time.
When the founders of TIME wanted to start a new magazine that would show America the world, they decided that the title had to be "Life." Someone was already using that title; so they bought it from them. LIFE, which hadn't been doing well during the Depression, was combined into JUDGE. And That was That.
The later covers of LIFE resemble nothing so much as the first covers of THE NEW YORKER. The magazines even overlapped in time, publishing many of the same artists months apart. Yet many LIFE covers looked totally like the cover of the preceding issue, or the next one; and sometimes not like anything ever published on any other magazine. It must have been a challenge to find it on the newsstand. 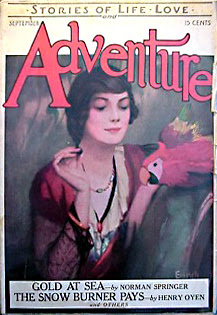 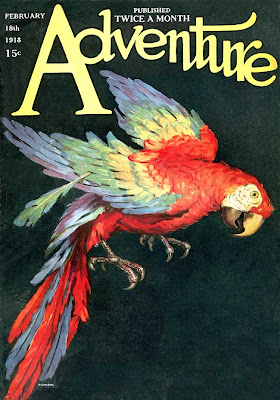 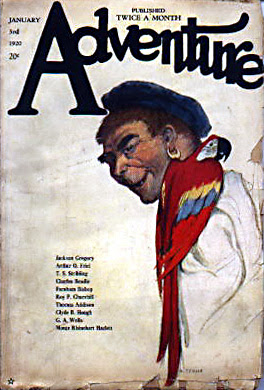 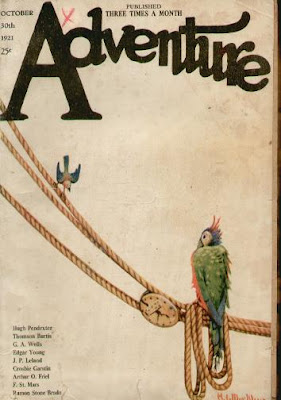 Begun in 1910 as a way for publisher Ridgway to tap into a new market, it specialized in stories of danger and thrills. At this time other pulp and popular magazines contained a wide variety of stories ranging from danger to romance (even when these are not the same thing). Its creation was a logical response to the success of pulps like ARGOSY, which by 1910 were selling hundreds of thousands of copies of each issue; but the focus on adventure was something new. It survived, in one form or another, into the early 1970's. 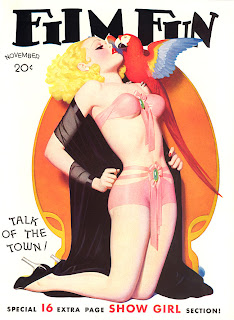 Film Fun 1936-11
Artist: Enoch Bolles
FILM FUN ran from July 1915 to September 1942. Actually, however, it traced its roots back to the late 19th century, having begun as JUDGE'S SERIALS (1887 to January 1890), reprinting material from the humor magazine JUDGE. This became JUDGE'S LIBRARY (February 1890 to July 1912) and then THE MAGAZINE OF FUN (August 1912 to June 1915). (Source: Richard E. Clear, Old Magazines.) Apparently FILM FUN did not continue on after 1942 under some other name.
Going by the covers it's hard to take FILM FUN seriously as a movie magazine. Well, it didn't take itself seriously. In the beginning it covered humorous movies and actually had comedians on the covers. By 1921 it was running painted covers by the likes of John Held, Jr. (his usual topics), and by 1922 Enoch Bolles was painting for it. Bolles did women in bathing suits and women in skimpy clothes; some believe they were called "pin-ups" (how quaint that sounds today!). Meanwhile the magazine continued with stories about movies, biographies of the stars, and lots of pictures. Maybe they were racy by the standards of the day, but today we find them, well, quaint. From mid-1923, until just before it folded in 1942 (after changing to photographic covers, partly because it was under threat of an obscenity prosecution), Bolles painted almost every cover for this magazine. 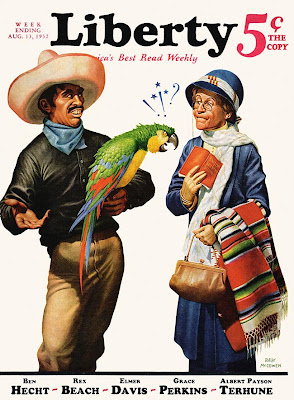 LIBERTY was a weekly features and fiction magazine that aimed at the mass market in American life and culture. It had some excellent material and art, but it was not aimed at the high end. It lasted from 1924 to 1950, and a nostalgia-oriented version was revived in the middle of the second half of the 20th century. Here's a page about the magazine that gives you a feel for the title.
Dorye Roettger's book Rivals of Rockwell has over 90 very-large-format, beautifully printed glossy illustrations from old LIBERTY covers (cropped to delete the logo, and sometimes a bit oddly) -- and it's not very expensive. 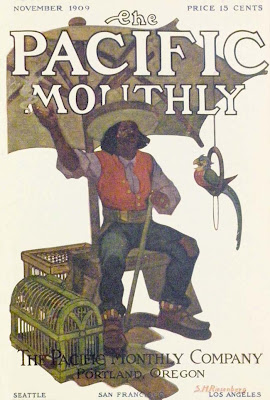 The PACIFIC MONTHLY was a regional magazine published in Portland, Oregon, and focusing on Pacific Northwest issues. It also ran a lot of real estate and booster pieces for the area. There were many articles and stories of general interest, and some issues were so full of advertising that it is a mystery why it was eventually sold to the company that published SUNSET (the original monthly magazine of that title, before it was sold to the Lanes and became a magazine of suburban living). To this day, SUNSET carries the subtitle "The Pacific Monthly". 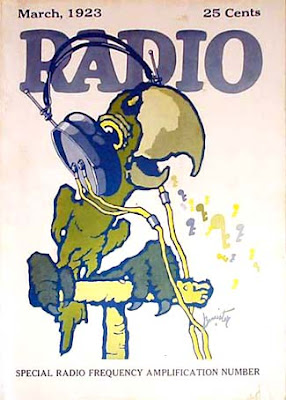 One of the earlier technically oriented but popular radio magazines, by the late 1920's it had changed to focus on the trade. After World War Two it became ... AUDIO ... and served the high-end audio enthusiast until the late part of the century. 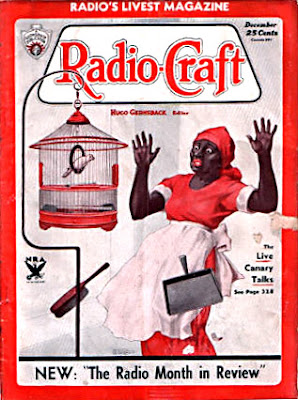 RADIO-CRAFT was aimed at the professional in the radio field. This is sometimes clear from the covers, but sometimes hard to tell; there was always a lot of enthusiastic tech-geekery present in the demographics of both publications. The first issue of RADIO-CRAFT was published in 1929; by late 1943 it had finally dropped the hyphen from the title. In 1948 the title changed to RADIO-ELECTRONICS. It seems to have published under that title until 1992, changing at that point to ELECTRONICS NOW and surviving until 1999.
All the early covers were paintings or drawings printed in full color (except in the depths of the Depression, 1933-4, when they were printed in two colors), until they changed from drawings to black-and-white photographs in 1939. From that point on they ran photographs, sometimes with color duotoning, until changing to color photographs in 1944. After 1944 the covers were always color photographs. 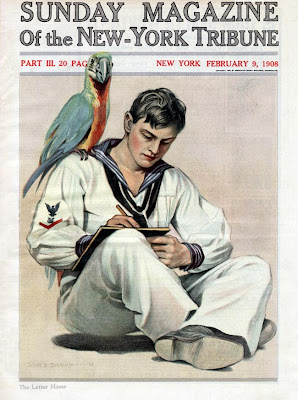 In the early 20th century your Sunday newspaper came with a Magazine section of articles, fiction, self-help and advertisements. Originally they were edited and produced locally, but entrepreneurs realized they could circulate millions of copies of the same basic magazine, distributed in major cities by the local newspapers with only a small change in the title for each city. Thus began the syndicated mass-market Sunday supplements, some of which carried outstanding art and fiction. 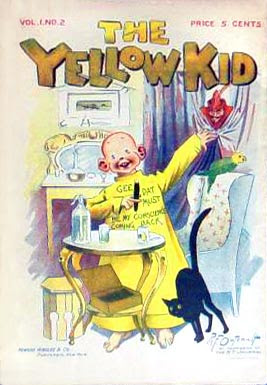 Ainslee's Magazine was best known as an all-fiction magazine aimed at women. While it was a precursor of the love-story pulps of the twenties and beyond, it carried a wider range of stories. Its publication history is complex.

Published as by Ainslee, part of Street & Smith, it was begun in March 1897 as THE YELLOW KID, a humor weekly, coat-tailing on the popularity of the YELLOW KID newspaper cartoons. In July 1897 it became a monthly as YELLOW BOOK. As the YELLOW KID boom faded, it changed format and was renamed AINSLEE'S in February 1898. At first it was a general-interest magazine, with articles and stories, but in 1902 it changed to an all-fiction format. AINSLEE'S lasted until December 1926, after which it was merged into FAR WEST ILLUSTRATED (originally begun as TRUE WESTERN STORIES). By 1931 this had become STREET & SMITH'S FAR WEST ROMANCES, before folding with the July, 1932 issue. The story was not over: it was revived in 1934 as AINSLEE'S, name changed in 1935 to AINSLEE'S SMART LOVE STORIES, and continued monthly from 1936 to 1938 as SMART LOVE STORIES before biting the dust for the final time. See the sample issues under various titles; there will be a test on this next week. [Thanks to Denny Lien and to Phil S-P's Magazine Data File (aka the BigList) for this information!] And see the AINSLEE'S data pages for more information.
Source: http://www.magazineart.org/ 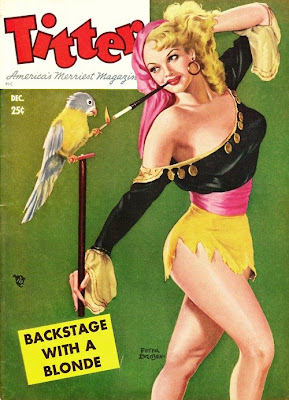 Titter (”America's Merriest Magazine”) was one of Robert Harrison's (1905–1978) publications, which focused on the burlesque. Its  distingushing features were a greater number of references to the burlesque, esp. the days of the CanCan, and a greater variety of front covers. The artist Peter Driben produced the majority of Harrisons covers, closely followed by Earl Moran and Billy deVorss. 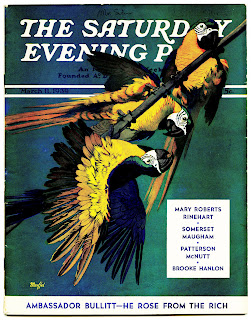 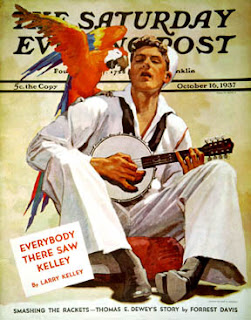 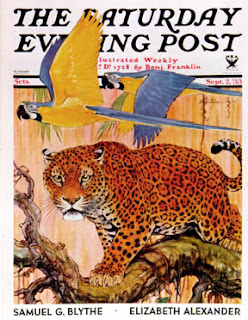 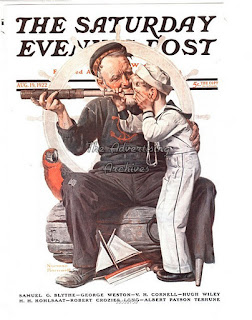 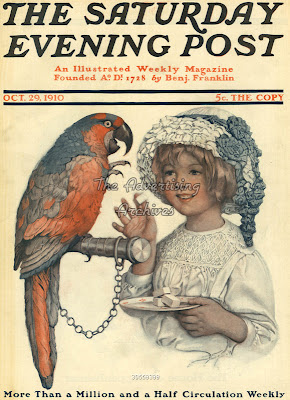 The Saturday Evening Post is a bimonthly American magazine. It was published weekly under this title from 1897 until 1969, and quarterly and then bimonthly from 1971.
The Saturday Evening Post published current event articles, editorials, human interest pieces, humor, illustrations, a letter column, poetry (with contributions submitted by readers), single-panel gag cartoons (including Hazel by Ted Key) and stories by the leading writers of the time. It was known for commissioning lavish illustrations and original works of fiction. Illustrations were featured on the cover and embedded in stories and advertising. Some Post illustrations became popular and continue to be reproduced as posters or prints, especially those by Norman Rockwell.