Mississippi River Tales
The Mississippi River Tales is a mural containing 24 panels covering nearly 18,000 square feet (1,700 m2) of the 15-foot (4.6 m)-high downtown Floodwall in Cape Girardeau, Missouri. It illustrates the history of the area beginning with the Native Americans who inhabited the area between 900 and 1200. Each panel tells a story.
The mural was painted by Chicago artist Thomas Melvin, in collaboration with several local artists, and was dedicated at a public ceremony on July 7, 2005.

"Nature's River"
Before humans lived in this area, the Mississippi River Valley was a great wide wetland teaming with plant and animal life. The hawthorne plant, with its brilliant blossoms and bright red berries, became the Missouri state flower. The Carolina parakeet, once prevalent in the river valley, had generally vanished by 1900. The last known member of the species died on February 21, 1918, in the Cincinnati Zoo. 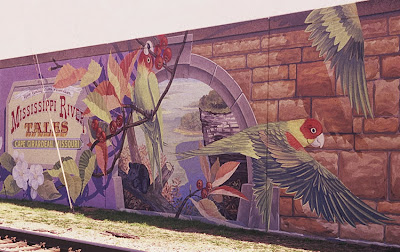