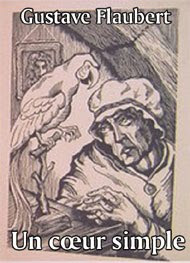 A Simple Heart, also called Un cœur simple or Le perroquet in French, is a story about a servant girl named Felicité. Flaubert’s tale recounts the series of deaths and departures that compose her life. Her father dies, then her mother, and the sisters are dispersed. She is beaten by a farmer who let her keep cows in his fields. Her fiancé is harsh and deceitful and leaves her heartbroken. She begins life again as a servant for Madame Aubain and her two children - Virginia and Paul - who she serves for half a century with the swollen devotion of a medieval nun. But one by one they all leave her – Madame Aubain, the children, her long-lost nephew, an old man living in a pigsty with a cancer as big as a pumpkin on his arm - they all forget her or die, even Loulou her beloved parrot. But Loulou, Félicité has stuffed. Jauntily posed with one foot in the air and a gilded nut in his beak, Loulou swells into more than just a stuffed shell of the bird that used to squawk out “Pretty boy! Your servant, sir! I salute you, Marie!" At worse, Loulou is transfigured into the king of trinkets, at best, into the holy spirit.


And when no one was left in her life but Loulou, Félicité took to saying her daily prayers kneeling in front of Loulou. When the glint of the sun fell through the window on Loulou’s glass eye, it seemed to ignite a spark that sent the simple woman into ecstatic reveries. At this point, Loulou was really no more than a mass of feathers with a broken wing and batting sprouting from holes eaten by worms. But none of that mattered to Félicité: she was now deaf, blind, and all but mute. As she finally passed from this world to the next, Félicité thought she saw a gigantic parrot hovering in the opening heavens above her.

When Gustave Flaubert was writing Un simple coeur, he rented a stuffed parrot from the Museum of Rouen. The bird was bright green with a blue head and scarlet wings, and it sat on Flaubert’s desk for three weeks as a muse for a story which describes the apotheosis of a stuffed parrot named Loulou.
Unlike Felicite, however, Flaubert was hardly overwhelmed with the sanctified aura of the bird on his desk. After three weeks, the author had finally had enough of the parrot. Something about it irritated him - perhaps the impertinent cock of its head, perhaps the supercilious twinkle in its glass eye - and just like that the affair was over. 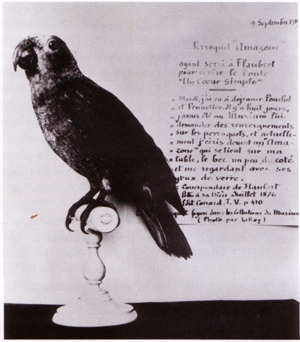