Magic: The Gathering (colloquially "Magic" or "MTG") is a collectible card game created by mathematics professor Richard Garfield and introduced in 1993 by Wizards of the Coast. Magic is the first example of the modern collectible card game genre and still thrives today, with an estimated six million players in over seventy countries. Magic can be played by two or more players each using a deck of printed cards or a deck of virtual cards through the Internet-based Magic: The Gathering Online or third-party programs.
Each game represents a battle between powerful wizards, known as "planeswalkers", who use the magical spells, items, and fantastic creatures depicted on individual Magic cards to defeat their opponents. Although the original concept of the game drew heavily from the motifs of traditional fantasy role-playing games such as Dungeons & Dragons, the gameplay of Magic bears little resemblance to pencil-and-paper adventure games, while having substantially more cards and more complex rules than many other card games.
An organized tournament system and a community of professional Magic players has developed, as has a secondary market for Magic cards. Magic cards can be valuable due to their scarcity and utility in game play.
link: Official site for Magic
link: Magic on Wikipedia
link: the Brothers Hildebrandt Website
link: Brothers Hildebrandt on Wikipedia
link: Carnivorous Death-Parrot credit 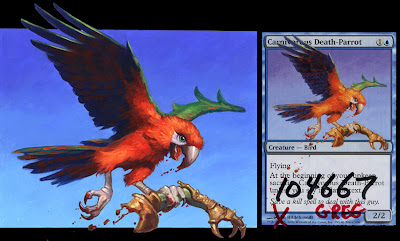 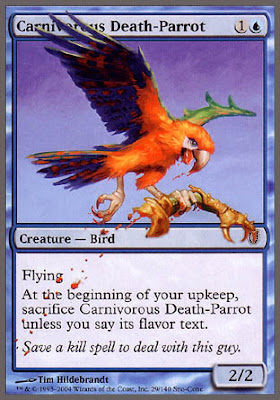