Angelo Jank (1868-1940) was at the forefront of German modernism, and one of the founders of the Sezession. His name is sometimes spelled Janck. The son of the painter Christian Jank, Angelo Jank was born in Munich, and studied under Ludwig von Loefftz and Paul Höcker at the Munich Akademie, where he subsequently became a professor. Among Jank's students were Mina Loy, Frank Figyes, and Ernest Hennings. Three huge historical paintings by Angelo Jank were destroyed in the Reichstag fire. 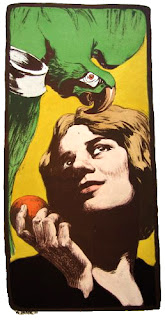