Bananas, From Lands of Tropical Splendor

Dean Cornwell (March 5, 1892 - December 4, 1960) was an American illustrator and muralist. His oil paintings were frequently featured in popular magazines and books as literary illustrations, advertisements, and posters promoting the war effort. Throughout the first half of the 20th century he was a dominant presence in American illustration. At the peak of his popularity he was nicknamed the "Dean of Illustrators". 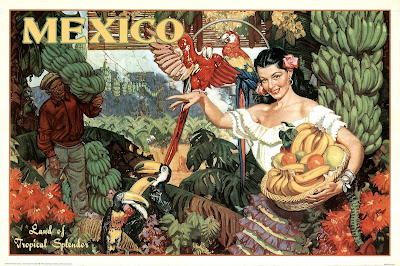 Although there is some discrepancy as to whether Dean Cornwell was born in New York City or Louisville, Kentucky, there is no questioning his impact on the art world of the 20th century. Best known for his outstanding murals in England, executing works for the Players Club and Chelsea Arts Club, and the United States, with projects including the Los Angeles Public Library and the Lincoln Memorial in Redlands, California, he also worked as a WPA designer and illustrator. Here we are treated to a work of his focusing on the promotion of the Banana Republic. Choosing to focus on the tropic splendor of the land from which the luscious fruit springs (although there is a nod to the hard laboring workers), an exotic, earthy beauty, who puts the Chiquita lady to shame, displays a basket of fruit featuring the tempting banana as she is surrounded by the splendor of the tropical rain forest, replete with parrots and toucans.
Source: http://www.trueartworks.com/poster.php/0000-0973