Walter Potter was born in 1835 in the village of Bamber in Sussex, England. After a brief schooling, he worked in his father inn, the White Lion, and pursued taxidermy as a hobby in a workshop above the stables. Potter’s first subject was his pet canary.
By the time of his death in 1918, Potter’s museum contained approximately 10,000 of his taxidermied birds and animals.

Perhaps the worse figures are part of Potter’s maniacal utopian tableau called “The Happy Family” crowded with animals including cats, dogs, owls, frogs, falcons, a parrot, a monkey, a tortoise, and a piebald rat. The animals’ face are rigid and gaunt, giving no suggestion of ever having been alive, or if they were, it was not this world that they inhabited. 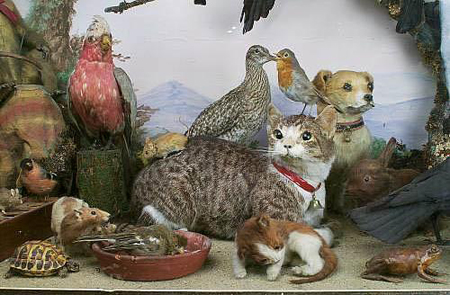